​"The Journal of Sedona Schnebly"

Because she runs to the maudlin, Lisa's suggested eventual epitaphs:

"We are each as vital a part of this vast adventure called life as any rock formation or raindrop."

"She carried a great many things from place to place." 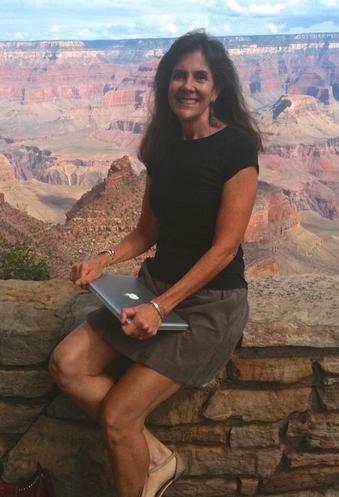 Lisa Schnebly Heidinger believes everyone is given puzzle pieces to contribute the overall picture of the world, and that hers involve collecting and sharing stories.
As a child, she dreaded having to stop at historical markers, but later understood her father Larry’s words that “journalism is history on the fly"...that there isn’t a delineation between past and present because stories span time.  As a cub reporter for the Green Valley News she interviewed Barry Goldwater and Rose Mofford; also Holocaust survivors, former Rockettes, and a local author whose friend Jane Russell served them lunch.
Then as a radio and TV reporter in Tucson, her subjects included Rev. John Fife of the Sanctuary movement, Dale Shewalter as he was mapping the Arizona Trail, Ft. Lowell re-enactors and politicians (ask her about her favorite Evan Mecham quote).  Lisa was one of the first reporters to interview polygamists in Colorado City in the mid-1980s.
She moved to Flagstaff to open KTVK-TV3’s Northern Arizona Bureau, where she reported on plane crashes, Grand Canyon issues, tribal politics and new breweries (she also crossed under the Arizona-Mexico border in a drug tunnel). She met satellite operator Tom Heidinger at the Winslow prison; they married and Lisa spent weekends with him, still savoring the Bureau. Because it would be a bear to raise children that way, she moved to Phoenix and began a Sunday op-ed column called Arizona Correspondent, which ran for three years.  She also wrote for Arizona Highways, taking new daughter Sedona, then also son Rye Schnebly, with her around the state. Her first book was “Tucson: The Old Pueblo,” followed by nine more, all about various aspects of Arizona.
Some people like to see affiliations, so here are things she has done or is doing:
Road Scholar speaker for Arizona Humanities; mentor at Black Canyon Juvenile Correctional facility; Flinn Brown Civic Leadership Fellow; Arizona Humanities Board of Directors; Arizona Town Hall participant; Pima County Victim/Witness volunteer, Independent Voter outreach facilitator; Arizona Historical Advisory Commission; Arizona Centennial Foundation Board; Arizona Women’s Hall of Fame Board; Arizona Historical League; NAU Arts & Letters Advisory Council; church lector and teacher.
Lisa loves road trips around the state, and the feeling of being a big help to a grownup.  She swears no cup of coffee is undrinkable – although a 3 p.m. pot from Grey Hills Trading Post came closest.